After driving by the Philmont  Scout Ranch I was curious to learn the history of it. 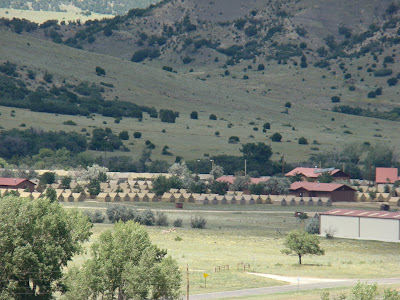 After some research, I discovered that this land was part of the Maxwell Land Grant.  After the civil war, scores of gold mines were excavated on this land and were mined into the 20th century.

Now a brief history of Waite Phillips (of Phillips Petroleum Company).  Waite Phillips came to Indian Territory in 1906, where his brothers had relocated, and he became an independent oil operator.

Before Waite Phillips became associated with Frank and L. E. in Phillips Petroleum Company, he had set up two of his own, the Waite Phillips Company in 1922, and the Independent Oil and Gas Company, which he later sold for $25 million cash.
After the sale, Waite Phillips devoted an increasing amount of time to real estate and charities. His long-time dream was to become a rancher, and in 1922 he acquired more than 300,000 acres near Cimarron, New Mexico where in addition to farming and apple orchards,  he ran more than 3,000 cattle,  9,000 head of Corriedale sheep and raised and  bred thoroughbred horses. He named his ranch Philmont, derived from his name and the Spanish word for mountain, "monte".  He and his wife built the Villa Philmonte and moved into this spacious mansion in  1927.  It was home to he and his family each summer. The ranch became a private game reserve for Phillips and his friends, and a number of hunting lodges and day-use camps were built.  Some of these camps, including Fish Camp and the Hunting Lodge, have been preserved by the BSA (Boy Scouts of America).
Phillips sometimes allowed others to visit his ranch, including a few Boy Scout troops. He was so impressed with the Scouts that in 1938, he donated 35,857 acres (145 km²) to the Boy Scouts of America (BSA). In giving it to the Scouts, he included 3 provisions: that his horse Gus could stay there until his death, that his family could come and visit the ranch, and that it remain a working cattle ranch. Boy Scouts of America initially named it the "Philturn Rockymountain Scoutcamp". The word 'Philturn' comes from Waite Phillips's name, together with the "Good Turn" he did by donating the property.
In 1941, Phillips donated more Philmont property to the Boy Scouts of America, including the Villa Philmonte, bringing the total to 127,395 acres (516 km²). Contrary to popular belief, Phillips did not give his entire ranch to the BSA, but only those properties that would have the most recreational value. The total donation comprised about 40% of the ranch.


To help fund the upkeep of Philmont, he threw in his
downtown Tulsa oil boom era skyscraper called the Philtower Building,  in Tulsa, Oklahoma.  The ranch's name was changed at this time to the "Philmont Scout Ranch and Explorer Base".
After playing detective, I discovered that the remaining ranch property was sold and became the UU Bar Ranch.  The UU Bar Ranch has gone through several owners.  It was recently sold to Bob Funk, of Yukon, Oklahoma and is now called the Express UU Bar Ranch.
has been restored to the time of Phillips' ownership

It is interesting to note that in 1938 Waite founded the Southwestern Art Association as a corporate organization to receive as a gift the Villa Philbrook, his Tulsa estate, which became the Philbrook Museum of Art.  This is a beautiful structure.

Tulsa, Oklahoma
Tulsa is the second-largest city in the state of Oklahoma and 45th-largest in the United States. With an estimated population of 385,635 in 2008, it is the principal municipality of the Tulsa Metropolitan Statistical Area, a region of 916,079 residents projected to reach one million between 2010...

Backpacking combines hiking and camping in a single trip. A backpacker hikes into the backcountry to spend one or more nights there, and carries supplies and equipment to satisfy sleeping and eating needs.-Definition:A backpacker packs all of his or her gear into a backpack...


In 1963, through the generosity of Norton Clapp, vice-president of the National Council of the Boy Scouts of America, another piece of the Maxwell Land Grant was purchased and added to Philmont. This was the Baldy Mountain mining area, consisting of 10,098 acres (41 km²).

In recent years, Philmont has also been able to gain use of the Valle Vidal Unit of the Carson National Forest. Since 1989, Philmont has had a series of five-year special-use permits from the Forest Service, allowing crews to hike and camp in the Valle Vidal as part of their Philmont treks. Philmont operates three staffed camps— Whiteman Vega, Seally Canyon, and Ring Place —and two trail camps in that part of the Valle. Those camps serve around 3,000 Philmont campers each summer. Each camper performs three hours of conservation work in the Valle on projects approved by the Forest Service.