Our neighbors told us about another road we could take to Mora that was quite pretty so off we went on another adventure.  Actually any excuse to go to Mora and eat authentic New Mexican cuisine at Hatcha's is enough to get us in the car.
This trip we took NM 434 out of  Angel Fire to Black Lake.  From there we took NM 120 east to Ocate where we caught NM  442 south to La Cueva and then NM 518 to Mora.  From Mora we took the high road back to Taos.
After we passed these ponds on NM 434 we turned on NM 120. 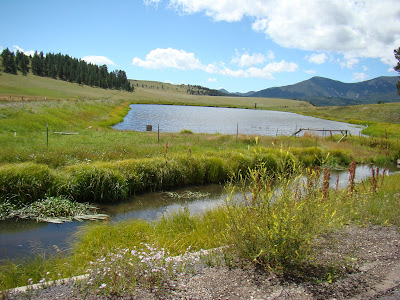 To our surprise NM 120 is a dirt road!!!  Yup, it is a state highway and it was actually being graded as we drove on it. 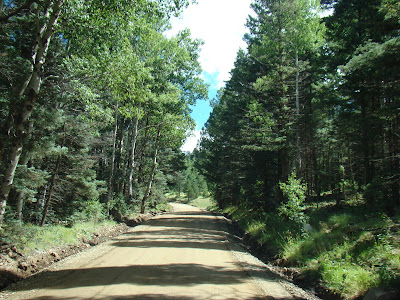 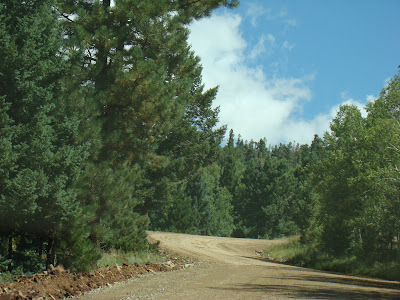 We came out into a valley and saw some beautiful ranches. 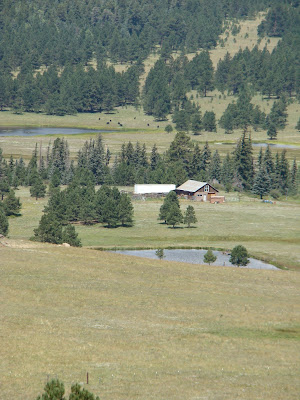 Whenever we see a fancy gate, it makes us wonder what kind of house is up the road... 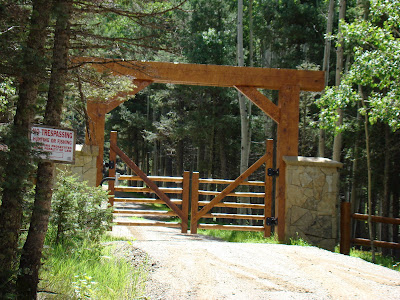 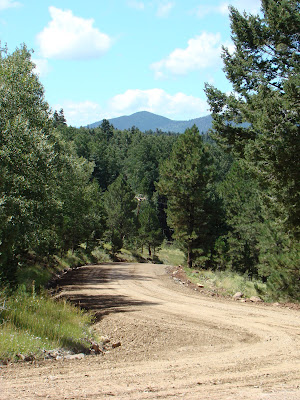 We went by some incredible stands of aspens.  Love their white bark.  We had the windows down and you could hear the leaves quaking in the breeze. 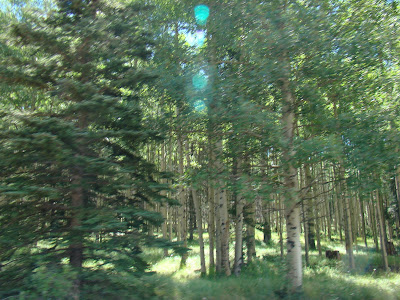 Back down in a meadow... 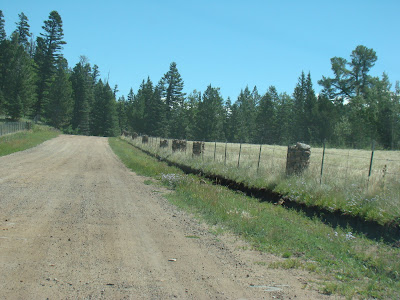 Then back up into the forest... 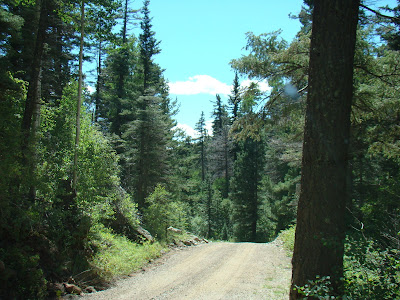 The road is not in near as good of shape here... lots of rocks and sometimes quite narrow. 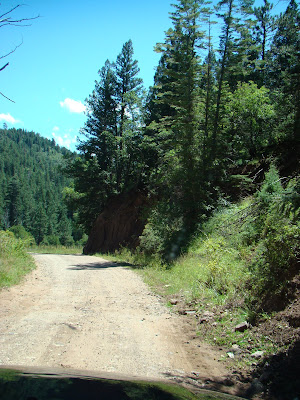 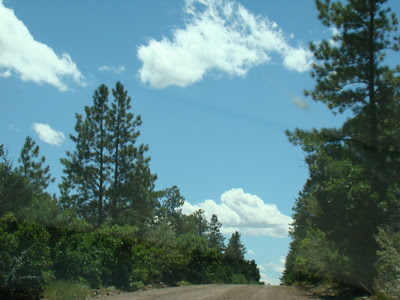 Following along side a stream... 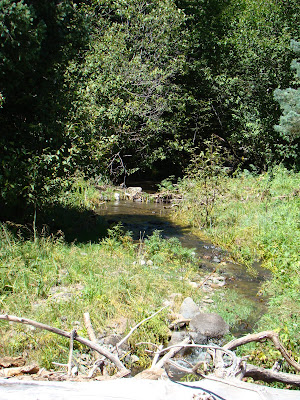 And then we came upon my favorite sign!  To be honest around the corner the highway once again was paved, but from the view point of the sign we didn't know this. 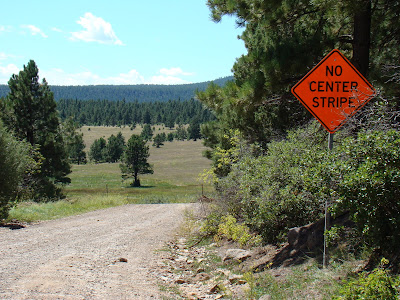 When we turned south on NM 442 we were once again in a big valley.  Unlike the previous one that was dotted with beautiful ranches, these were not near as prosperous or pretty.  I think it is fairly difficult to eek out a living in these parts. 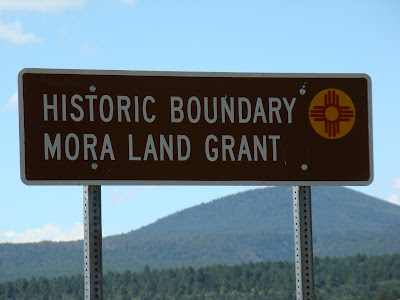 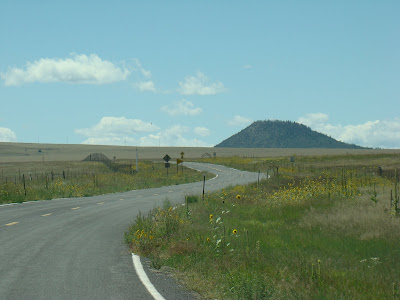 Finally turning toward Mora...  mountains again in the distance.  Love that sight! 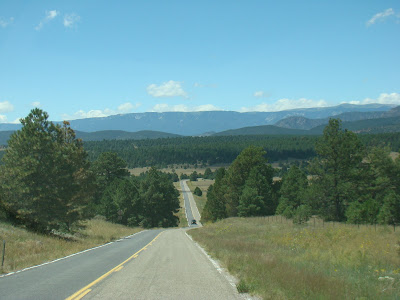 After a wonderful lunch at Hatcha's, we go back up in the mountains toward Taos. 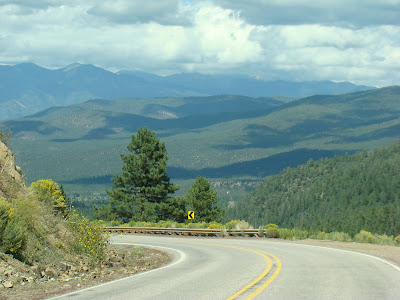 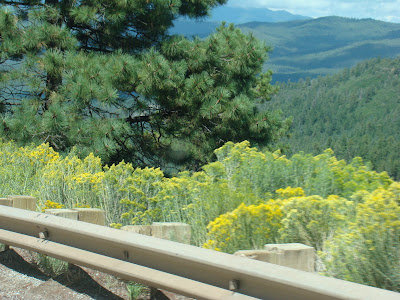 We stopped at Ranchos de Taos to take pictures of the San Francisco de Asis Mission Catholic Church for Valerie.  The church is in the center of the plaza of the historic village of Ranchos de Taos.  The village was settled by the Spanish in 1716.

Construction of this adobe church began in 1772  by Franciscan Fathers and was completed in 1815. The main body of the church is 35 feet wide by 125 feet long and is in the shape of a cross.  The adobe walls are four feet thick. 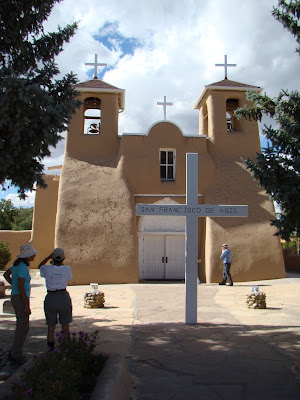 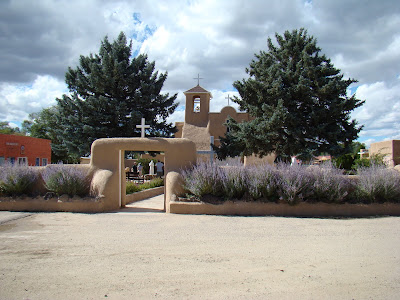 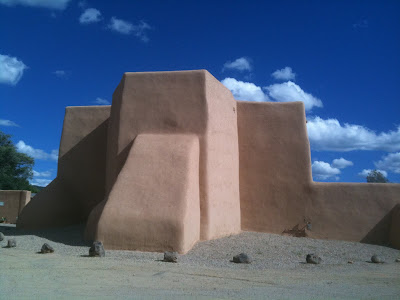 The history surrounding the church made me curious about the history of Taos.  Here is a short summary of its turbulent times.
Taos was established c. 1615 as Fernandez de Taos, following the Spanish conquest of the Indian Pueblo villages. Initially, relations of the Spanish settlers with Taos Pueblo were amicable, but resentment of meddling by missionaries, and demands by encomenderos  for tribute, led to a revolt in 1640; Taos Indians killed their priest and a number of Spanish settlers, and fled the pueblo, not returning until 1661.
In 1680, Taos Pueblo joined the widespread Pueblo Revolt. After the Spanish Reconquest of 1692, Taos Pueblo continued armed resistance to the Spanish until 1696, when Governor Diego de Vargas defeated the Indians at Taos Canyon.
During the 1770s, Taos was repeatedly raided by Comanches who lived on the plains of what is now eastern  Colorado. Juan Bautista de Anza,  governor of the Province of New Mexico, led a successful  punitive expedition in 1779 against the Comanches.
After the U.S. takeover of New Mexico in 1847, Hispanics and American Indians in Taos staged a rebellion, known as the Taos Revolt, in which the newly appointed U.S. Governor, Charles Bent, was killed.
Posted by Bill and Debi at 11:16 PM