Friday was our 39th anniversary.  To make it even more special, it fell on a Friday the 13th (we were married on a Friday the 13th).
Because driving and exploring have been some of our favorite pastimes, we decided to drive around the Enchanted Circle with a few added side trips to the Rio Grande Gorge Bridge and the Taos Ski Valley.

This route is a National Forest Scenic Byway that circles Wheeler Peak, the highest mountain in New Mexico at 13,161 feet.  The road weaves in and out of the Carson National Forest.  We would be passing by some rocks - quartz and feldspar - that date back  two billion years. 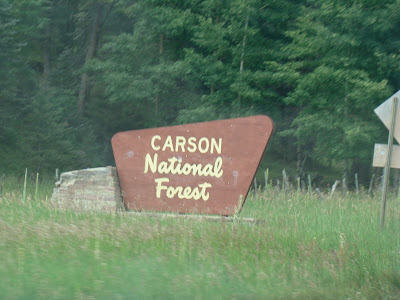 Our goal was to end up in Red River for dinner so we loaded the dogs in the car and headed south toward Taos, 31 miles away.  To get to Taos, you have to to go up over the Palo Flechado Pass at 9,101 feet.  From the turn for Angel Fire to the top of the pass is two miles of very twisty roads that have lots of switchbacks. 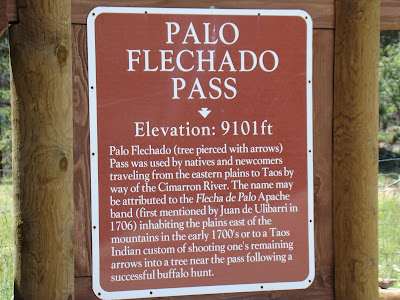 Once you are at the top of the pass, the downhill road into the Canyon of the Rio Fernando de Taos (commonly called the Taos Canyon) is a much more gentle ride down the mountain.  Not only did we follow a wonderful gurgling creek, as we got closer to Taos we passed lots of artists' studios.  One of these days we'll stop at some of them.... 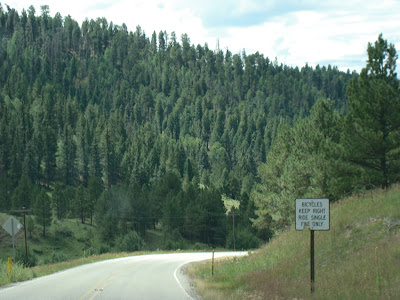 We drove through some gorgeous meadows with signs warning of elk.  Unfortunately at this time of year, they don't venture out of the forests until dusk to eat. 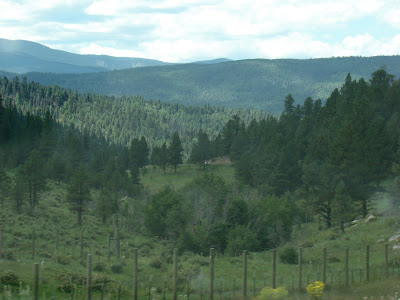 Taos was established in 1615 following the Spanish conquest of many of the Indian pueblo villages. The old plaza is full of quaint shops, studios and restaurants - an easy place to spend money!

Taos Pueblo, located 2 miles north of Taos, is the northern most pueblo of the 19 pueblos found in New Mexico. 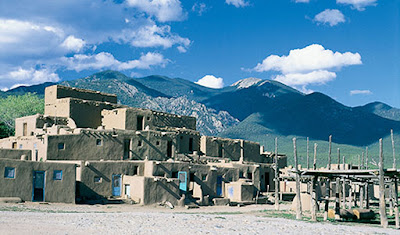 Archaeologists have found evidence that the Taos Valley has been inhabited as far back as 3,000 B.C. Prehistoric ruins dating from 900 A.D. can be seen throughout the area.

However, the Taos Pueblo is thought to have been built between 1000 and 1450 A.D. It is one of the oldest continuously inhabited communities in North America.  In keeping with tradition, there is no electricity or running water in the Pueblo.  Today only about 150 people continuously inhabit the Pueblo, with many others maintaining a home there for special celebrations.  Many artisans have shops in the Pueblo.


Our first side trip was to the Rio Grande Gorge Bridge which is located about 7 miles  west of Taos on NM 64. 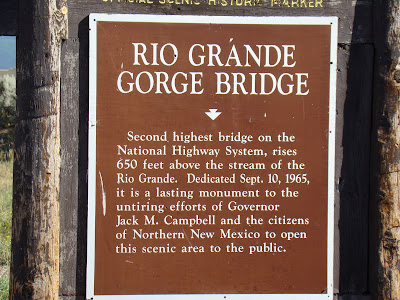 Bill studying the steep drop down to the river... 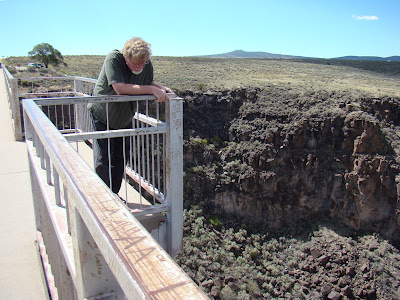 Picture was taken standing next to Bill. 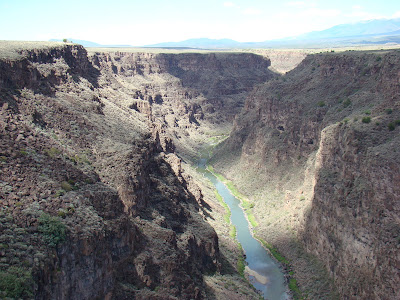 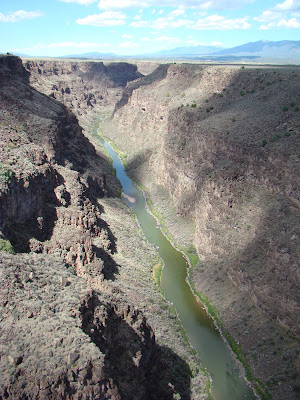 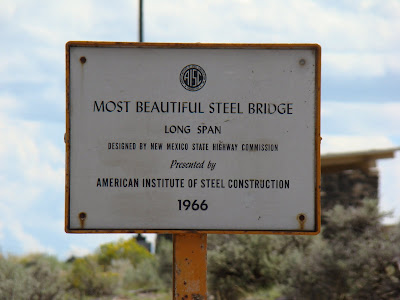 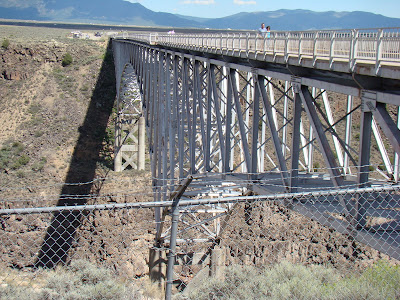 We drove back the the intersection on the north side of Taos and this time drove north to explore the Taos Ski Valley located 19.5 miles from downtown Taos. 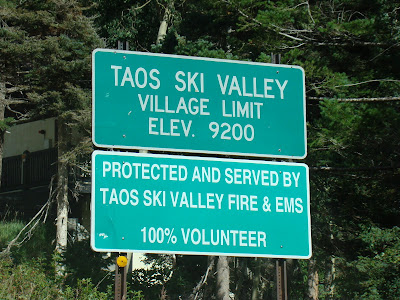 This is billed as New Mexico's best ski area.  The vertical drop is 2,612  feet and the longest ski run is 5.2 miles.  The ski lift was running but when we got out of the car it was COLD and we hadn't brought our jackets.  So pictures only... 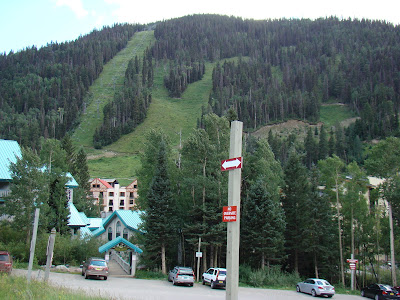 As we were leaving, Bill spotted the cutest log cabin... 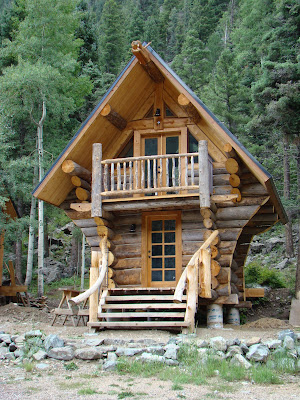 I rather liked this little house - sign said it was a kit house. 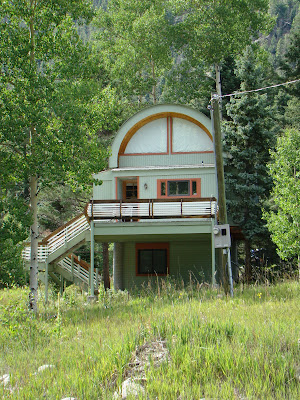 Back on the road again.  Next town is Questa, elevation of 7392 feet,  but first we go by the Red River Fish Hatchery.  Since we had stopped there already, we passed it by.


Right after we left Questa, we went by a huge mine situated right on the edge of the road.  After doing a little research, I discovered that this is the Chevron Questa Molybdenum (mineral used to strengthen steel) Mine.  Located nine miles east of Questa, the mine opened in 1916. It was purchased by Molycorp Minerals in 1950 and became a subsidiary of Chevron in 2005. Formerly an open pit excavation, the Chevron Questa mine has operated as an underground mine since 1982.  In 2009, due to economic conditions, there was a 54 percent cut in personnel.  Today a skeleton crew operates the mine. 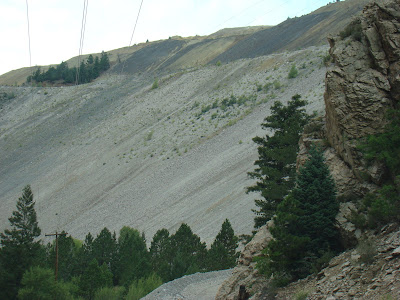 Leaving Questa, you follow the Red River Canyon  uphill that is lined with colorful cliffs.  The Red River  runs along the road and there are lots of places to pull off to see the River (actually is 'stream size' not 'river size'). Thirteen miles past Questa sits the town of Red River at an elevation of 8,750 feet. This town sits in the midst of the million acre plus Carson National Forest. 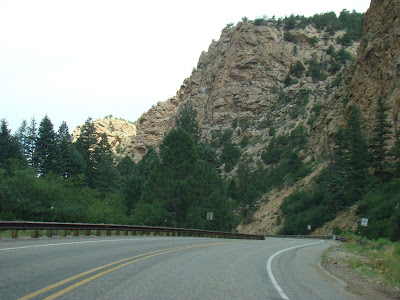 This area has lots of bighorn sheep.... but we didn't spot any of them. 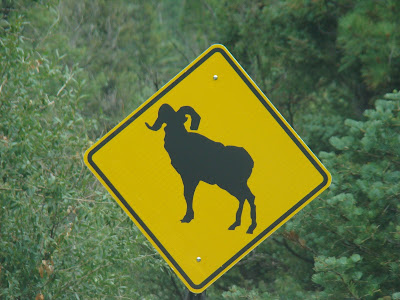 Red River, population 484,  is an old western mining town that boomed nearly a century ago when gold, silver, copper and molybdenum was discovered in surrounding mountains. Today Red River is a popular four-season resort town, known for it's hiking, fishing, and bicycle touring opportunities in the summer and Nordic, alpine skiing and snowmobiling opportunities in the winter.
After a nice dinner, we headed on to Eagle Nest, 13 miles away.  To get there we go up a steep 4 mile climb to Bobcat Pass, elevation 9,820 feet.  Then there was a nice leisurely descent into the Moreno Valley and the town of Eagle Nest. 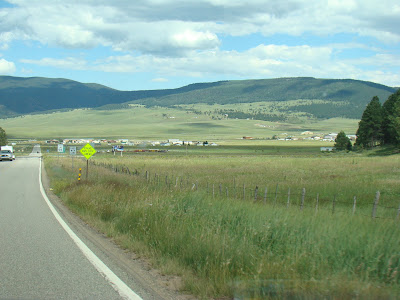 All in all, it was a wonderful day.  We saw lots of different terrain - from forests to open meadows to sage brush mesas.  No wonder it is called the Enchanted Circle.
Posted by Bill and Debi at 12:17 PM