The next day we decided to go to Cripple Creek.  The girls were excited to learn that we would try to find the wild donkeys that roam the town.  So once again we packed a picnic lunch and headed off on another adventure.
Our first stop was the Cripple Creek Heritage Center.  We spent longer there than planned as Grace really got into reading the photo displays and taking pictures. 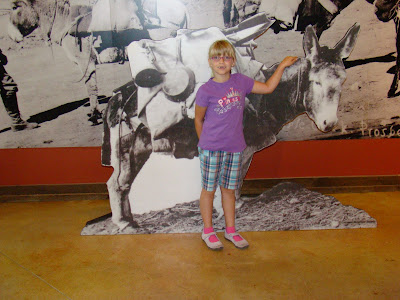 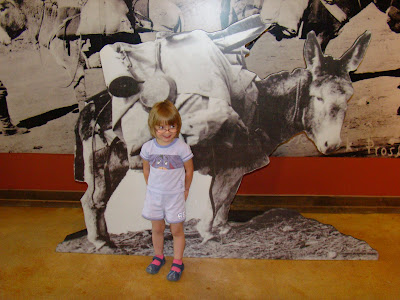 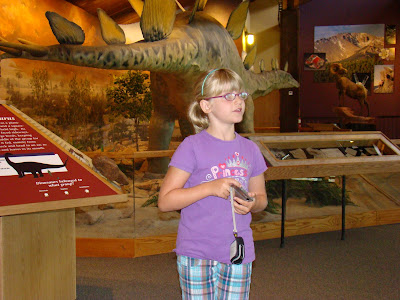 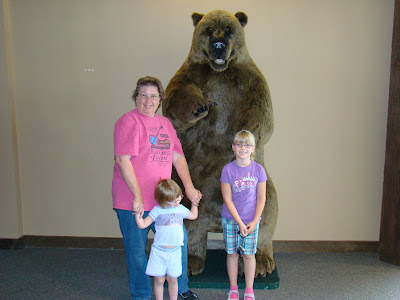 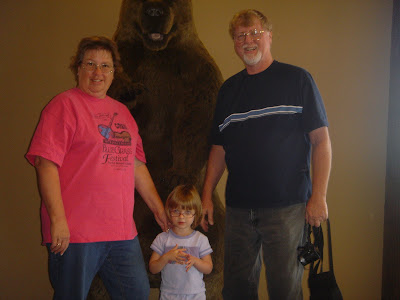 Next stop - the Mollie Kathleen Gold Mine Tour.
"The nation’s only historic gold mine tour descends 1,000 feet below ground, where visitors learn about the workings of the 1890s hard rock gold miner. Guided tours allow visitors to explore the overlapping evolution of all four mining phases used to extract gold from the Mollie Kathleen, beginning with a ride on a skip (elevator) to the lower working levels of the mine. Visitors witness the operation of numerous pieces of air-powered gold mining equipment and ride aboard the last air-powered Tram-Air Locomotive."

We knew that we were going to have to wear hard hats when going down into the mine and were unsure how  Chi would handle this. 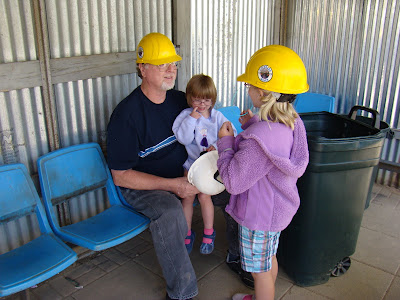 When she finally realized that if she didn't wear the hat, then she and Grandpa were not going down in the mine, she decided to wear the hard hat. 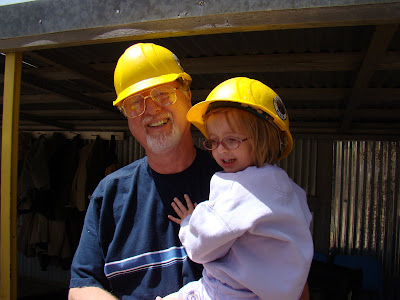 So we all squeezed into the skip (the elevator) and descended 1000 feet into the earth.  We had eight people in our skip. 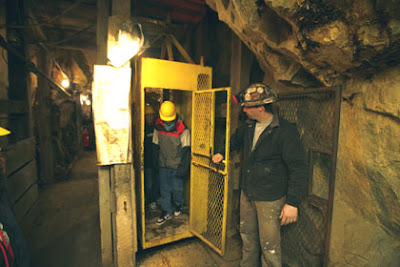 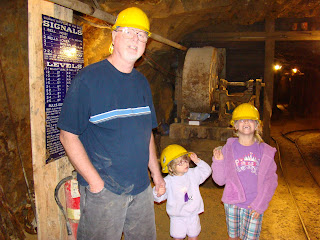 We didn't know that our guide would be demonstrating each of the air-powered equipment.  When he said "cover your ears", he was serious!  The first time  Chi didn't do this and literally crawled up Bill when the noise started.  After that she was a pro at covering her ears.  Notice Grace was busy taking pictures. 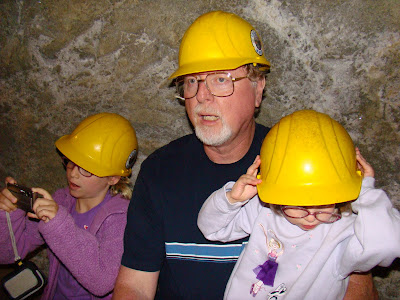 Our guide.  He has been a miner for 7 years.  In the winter he works in a copper mine. 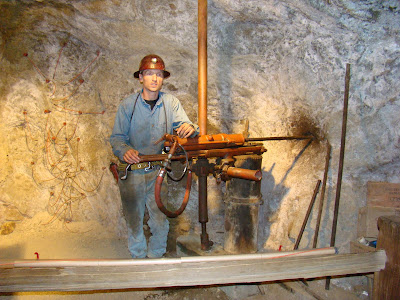 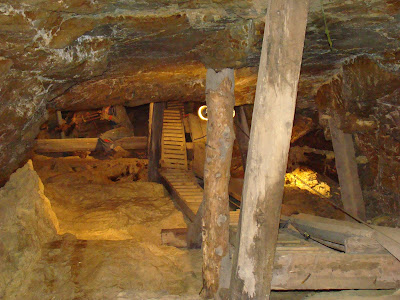 Getting ready to ride the last operating air-powered Tram-Air Locomotive. 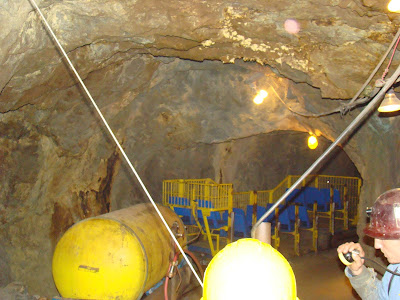 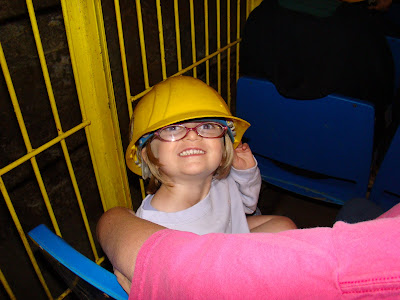 Gracie got to try out the rail bicycle that the mine bosses would use to get around to the different areas. 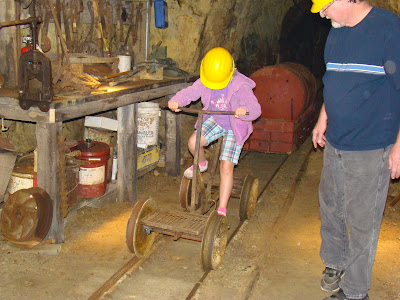 After we left the mine, we went on a hunt for the donkeys.  As luck would have it, we found them in the side yard of a house.  We were able to go around the block and get to them from a vacant lot. 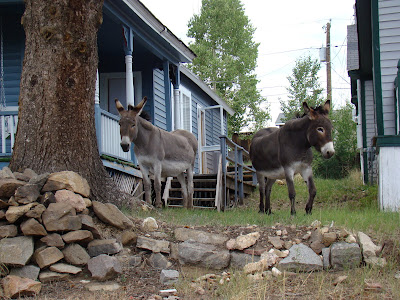 No carrots for lunch as they were fed to the donkeys! 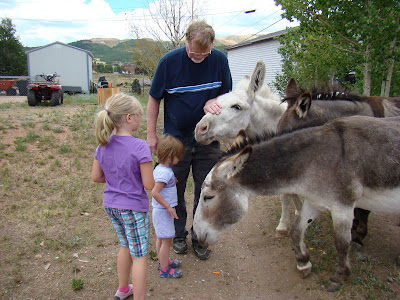 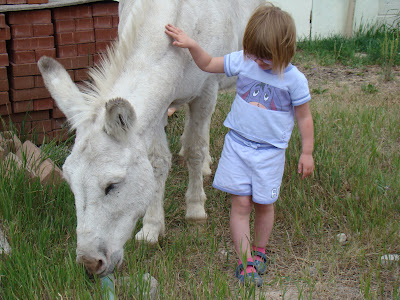 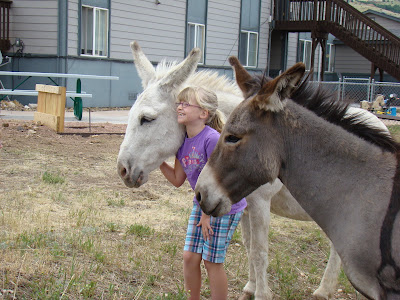 Finally were able to pry the girls away from the donkeys.  Cripple Creek has a nice downtown park and  playground so we went there for our picnic. 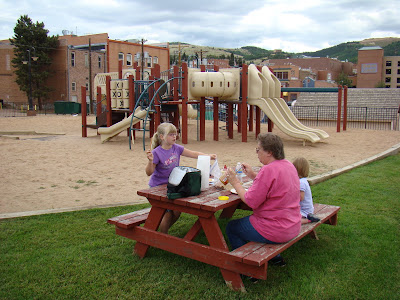 Naps were taken on the way home.  After dinner, we declared it bubble time.  We set up a table in front of the motorhome and watched the bubble competition! 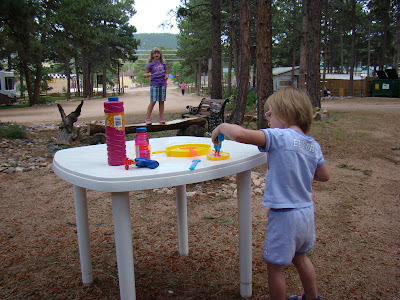 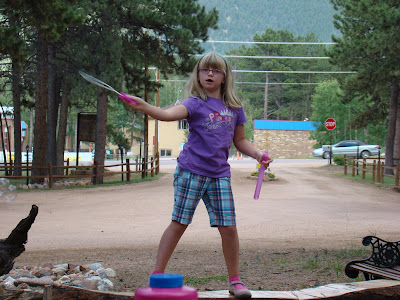 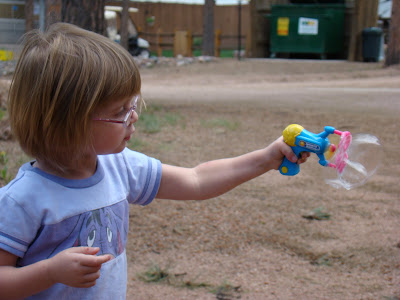 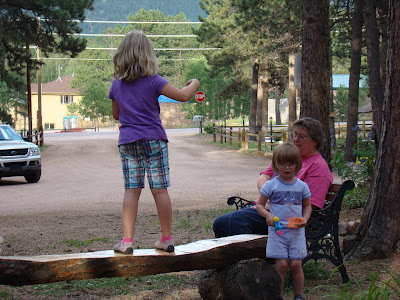 After bucket showers, it was bed time for everyone!  Two more days left here in Colorado with the girls.  Gosh, the time is going by fast.
Posted by Bill and Debi at 10:02 PM