The next day dawned bright and clear - just perfect for a trip up Pikes Peak.  Grace was really pumped to go to the top and couldn't imagine standing on top of the mountain.  Chi on the other hand just loved looking at the mountain and called her Pikes Peach which became shortened to Peach.
Every time we turn out of the campground, there at the end of the road is Peach! I've got to tell you, we have gotten really used to this view.  Chi would get excited each and every time she first saw "Peach". 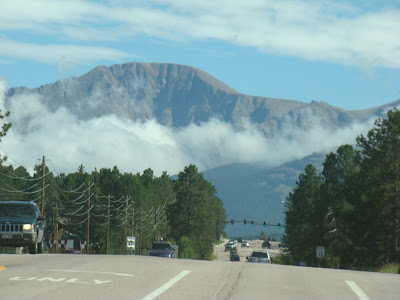 Gracie in the front seat, with the Pikes Peak Highway Map, was ready for this adventure.  She quickly read the information and told us that the drive was 19 miles.  She told us the tree line was at mile marker 14 at an elevation of 12,000 feet. 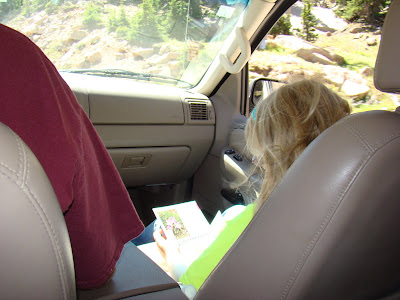 Within minutes on the mountain, Chi announced she needed to go potty.  Well, the darling learned about primitive bathrooms!  Needless to say, she was not impressed one bit. 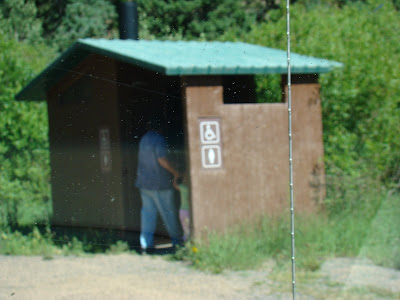 We all anxiously awaited seeing the tree line.  And then all of a sudden we rounded a corner, and there it was! 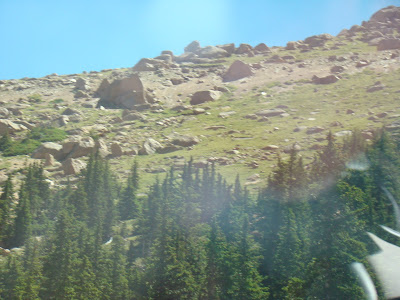 Grace was a little nervous when this was the view out her window!  She felt like she was clinging to the side of the mountain. 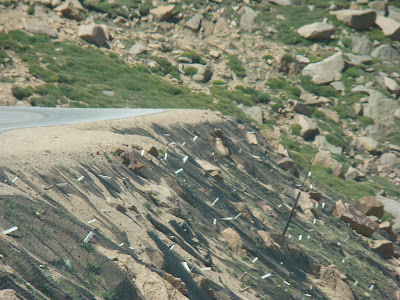 Snow!  A promise was made to stop and play in the snow on the way down. 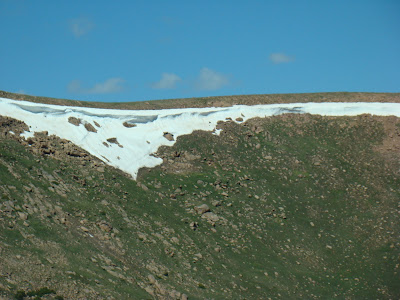 The girls had fun looking to see where the road went to next. 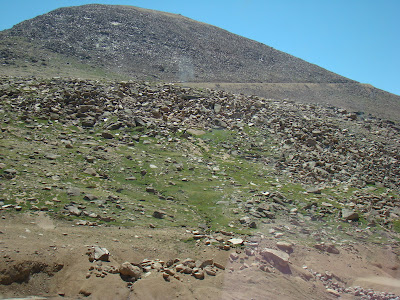 Gracie learned about hairpin curves.  Chi was in charge of telling Grandpa to slow down. 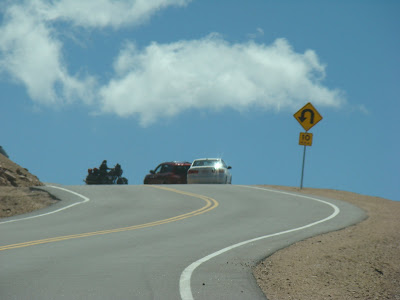 Finally we reached the summit - my favorite part due to the hot fresh donuts that you can buy there!  Grace said she was standing on top of the world. 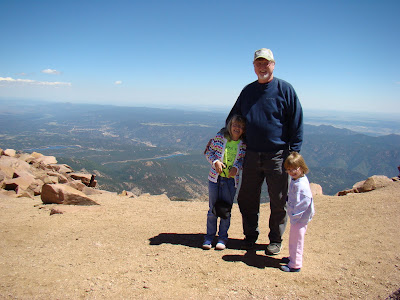 After filling up on hot chocolate and fresh, hot donuts, Grace found a penny machine. 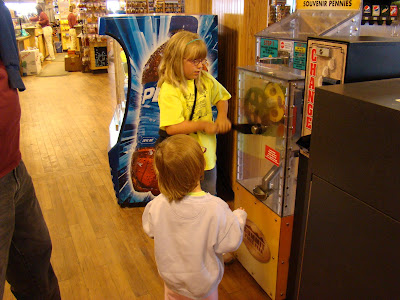 And then Chi decided it was her turn! 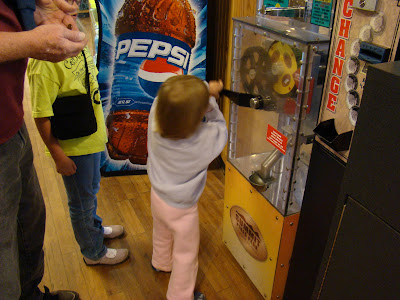 Unfortunately Grace then experienced some altitude queasiness - but we think it came from cranking the penny machine four times!  So outside for some pictures and then down the mountain we went. 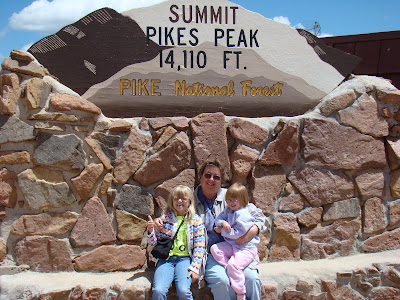 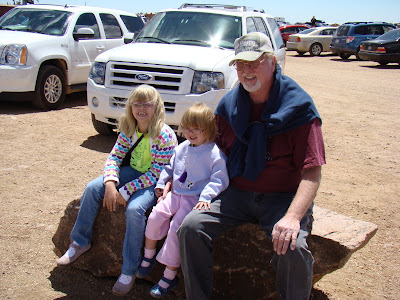 We took our dogs with us.  As you can see, they were quite comfy on their blanket between Chi and myself. 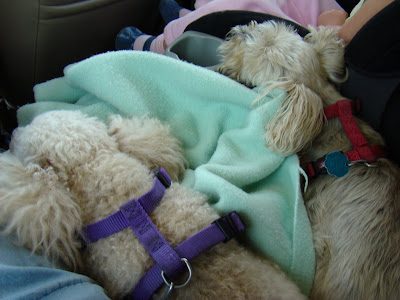 Carving their names in the snow!!! 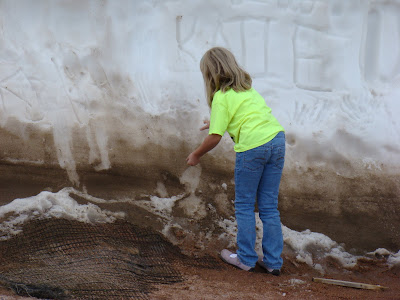 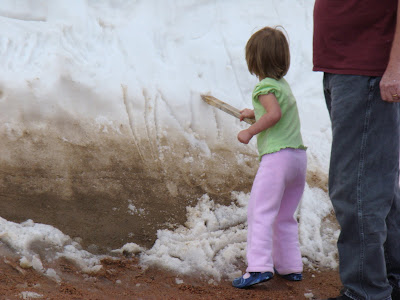 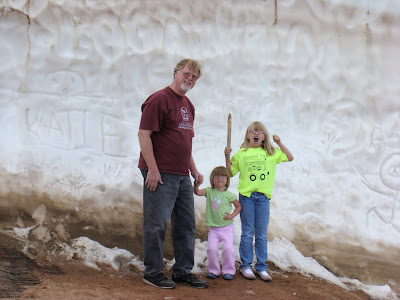 And then a snowball fight erupted! 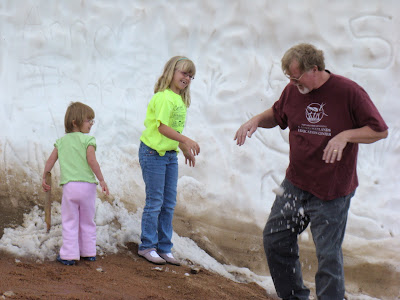 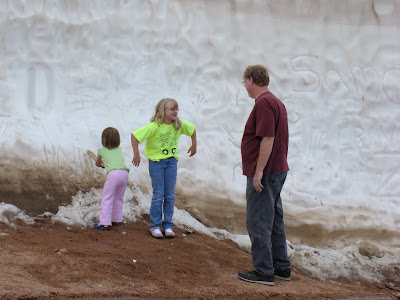 We spotted this young mule deer as we came down the mountain. 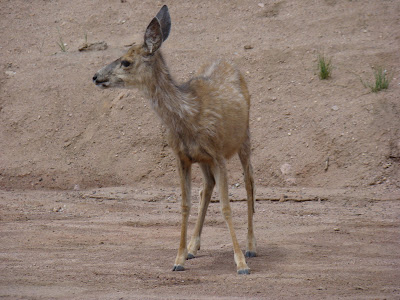 We stopped at the Half Way Picnic Grounds (elevation 9,960) for a picnic. 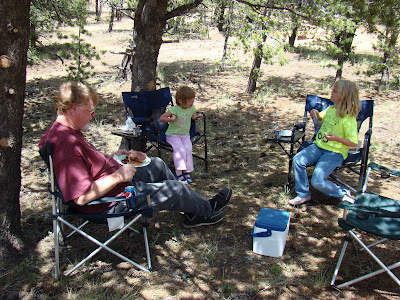 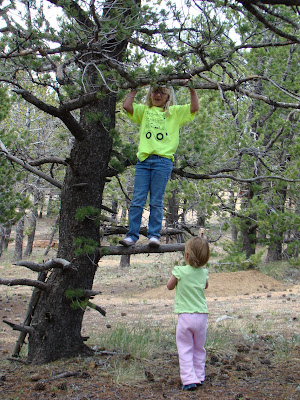 We got back to the motorhome in time for a late nap.  After the nap we headed down the mountain ten minutes to the town of Green Mountain Falls to feed the geese and play at the playground. 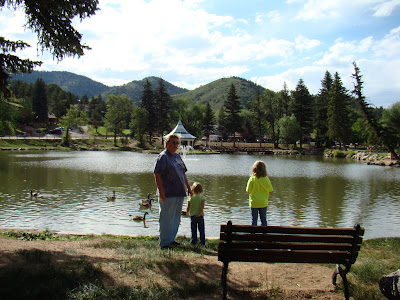 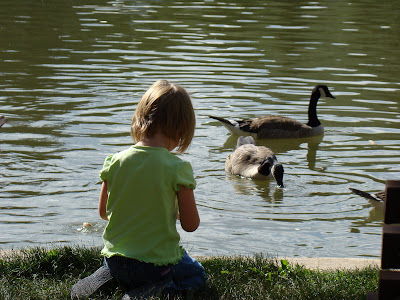 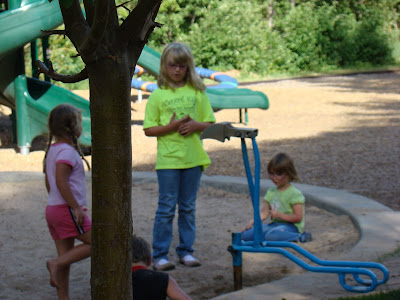 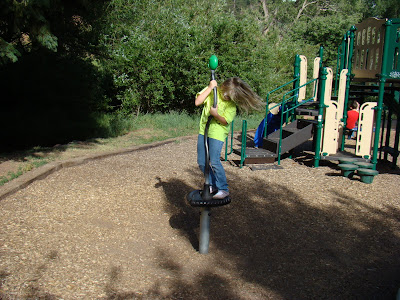 After dinner we once again headed out to look for elk.  We had some spectacular views of Pikes Peak.  The sun was just right to illuminate some of the roads we were just on when driving up the mountain. 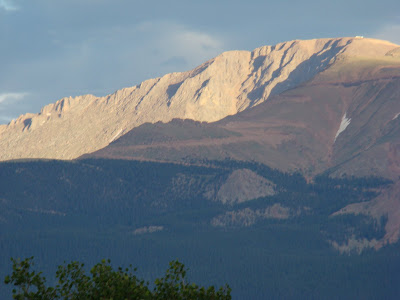 Wow.  It's been another busy day.  Time to crash so we can keep up with the girls tomorrow.