So on February 8th we packed up the motorhome and traveled to San Antonio.  We stayed at Braunig Lake RV Resort for 2 nights.  This is located on the south side of San Antonio.
We got up the next morning ready to explore downtown San Antonio.  We started the day off by going to Lulu's Bakery and Cafe for breakfast.  We had seen this restaurant featured on the Food Network and Travel Channels for the cinnamon rolls that are the size of a dinner plate.  Don and I decided that would be breakfast! 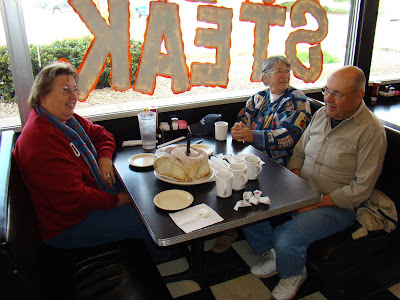 Can't quite see it?  Let me show you a bigger picture! 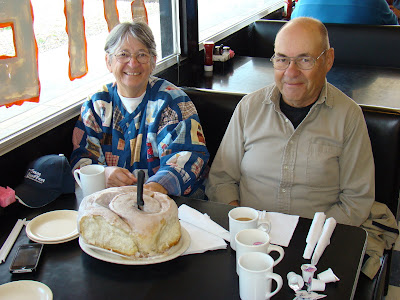 The amazing part of this roll was that it was actually quite tasty.  In fact it was so good that we bought one to have the restaurant send one to Billy and Sheri and the girls.
Juanette's small stack of pancakes were 2 Texas size giant pancakes. She gave one to Don and is trying to eat this one! 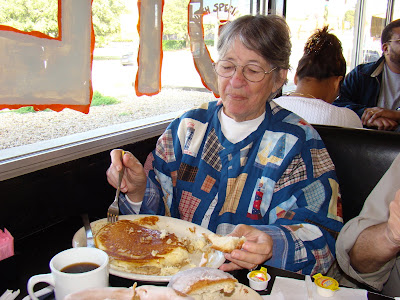 Next stop is the Visitor's Bureau to get some San Antonio and Texas Hill Country brochures. 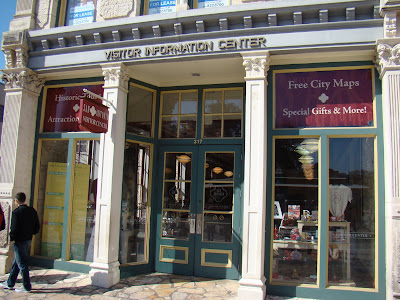 Oh oh, noticed that the Alamo is across the street.  Definitely need to make a trek over there. 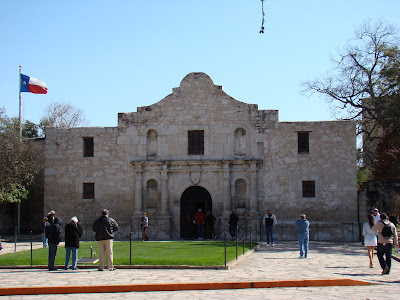 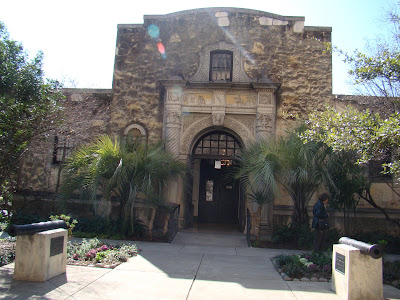 No pictures allowed inside but we took lots of the gardens in the back.  Gardens were filled with cactus and succulents.  Decided it was a good place to take some pictures of ourselves. 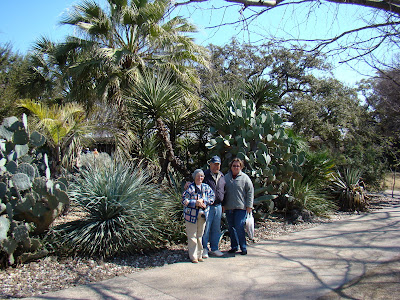 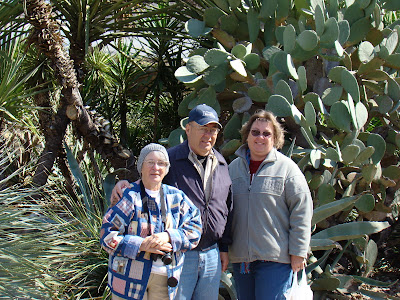 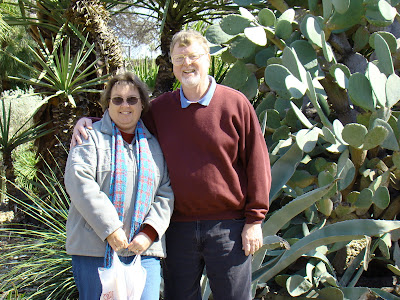 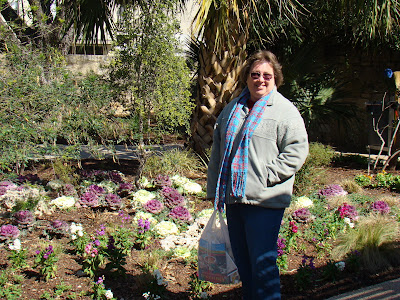 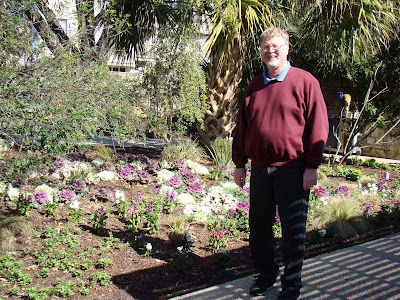 Okay, enough pics of us.  Let's move on to the Pioneer Mill museum and store and heritage home area along the river. 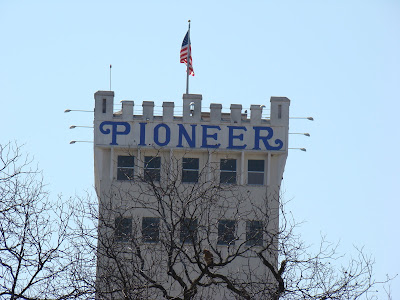 We discovered a lovely area of beautifully restored old homes along the river. 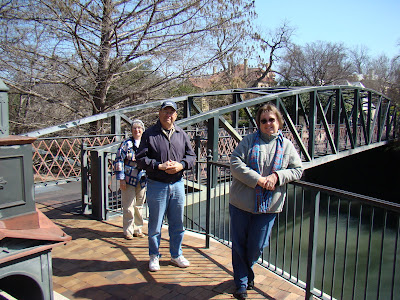 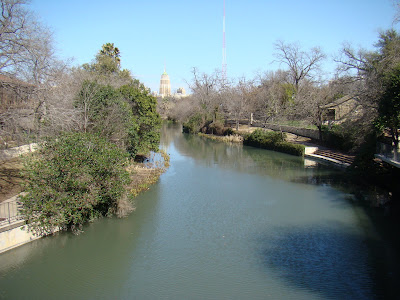 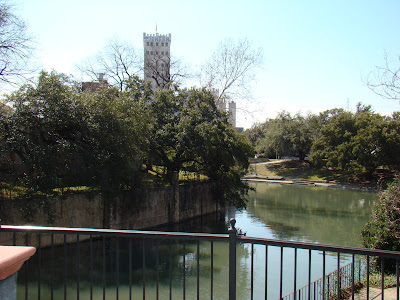 Daffodils are already blooming in the first part of February! 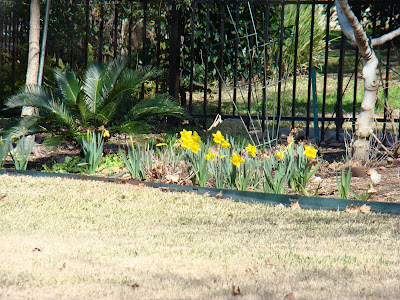 Isn't he pretty... or should I say handsome! 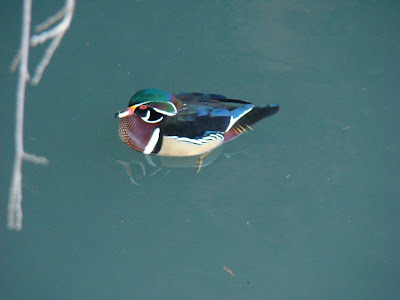 Now a stop for Don and Bill - the Texas Air Museum. 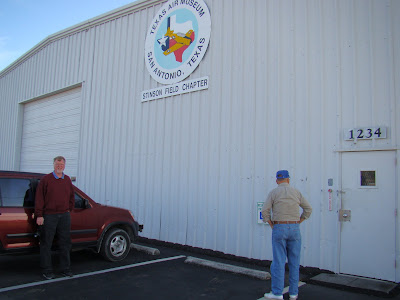 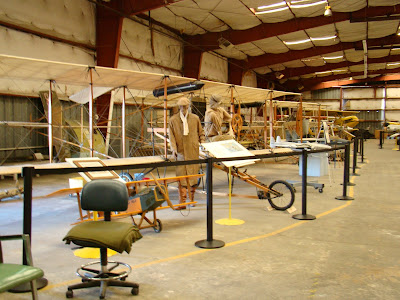 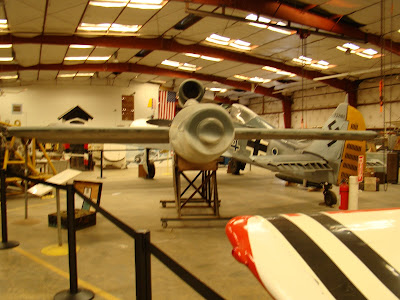 Dinner that night was at a little mom and pop barbecue restaurant that had great food at even better prices.  Pie for $.99 - unheard of!!! 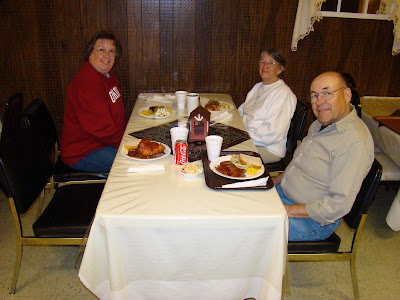 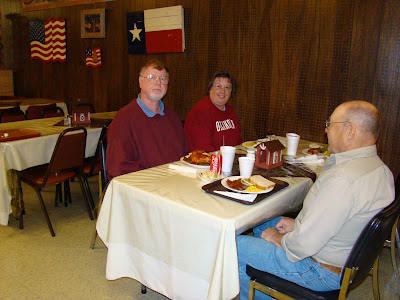