A Week in Denver - A Trip Up Mount Evans Part 1

One of the highlights of our stay in Denver was the drive to the top of Mount Evans.  First a bit of information about Mount Evans and this drive.
Mount Evans is a mountain in the Front Range region of the Rocky Mountains, in Clear Creek County, Colorado.  It is one of 54  fourteeners  (mountains with peaks over 14,000 feet) in Colorado and the closest fourteener to Denver.   It is often compared to Pikes Peak (Colorado Springs) - another Front Range fourteener - which Mount Evans exceeds in elevation by 154 feet.
The Mount Evans Scenic Byway begins at the junction of Interstate 70 and State Highway 103 near Idaho Springs  and continues on State Highway 5 to the summit of Mount Evans.
The byway is 28 miles in length and gains over 7,000 feet (2,100 m) of altitude. Achieving a final altitude of 14,130 feet (4,310 m), this is the highest paved road in North America.  Once at the top you can then climb the rocks the last 100 feet to the summit - 14,230 feet above sea level.
From the plains of Denver to the summit of the mountain, you travel through five climate zones!
So come along with us and experience some breath taking scenery and learn a bit of history as we explore the mountain.
As we headed west out of Denver on Interstate 70, the Front Range of the Rockies dominated the scenery.  We were surprised to see so much snow still on the mountains on June 12th.  Hopefully there will be lots of snow at the top! 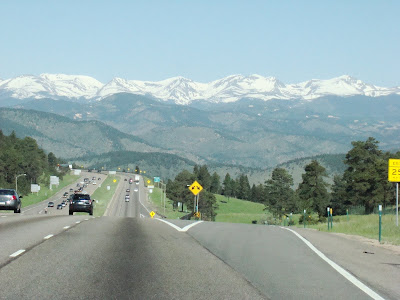 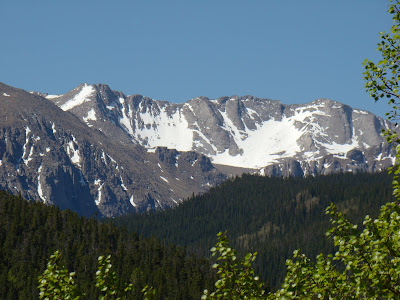 Our first stop was at the picture perfect Echo Lake Park. This park provides a stone shelter with picnic tables and barbecue grills on one end of the lake with the 1926 Echo Lake Lodge situated at the other end.  On the way back down we stopped at the lodge for a late lunch.
Echo Lake is a shallow lake situated at 10,600 feet (3,230 m) above sea level. It was formed roughly 10,000 years ago. 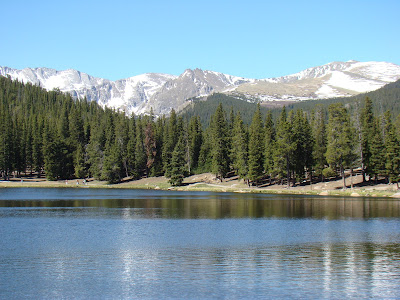 As we turn onto State Highway 5, we stop at the ranger station to pay.  Old age pays off as Bill has a Senior Pass for the National Park system so it costs us nothing to continue the drive up the mountain. 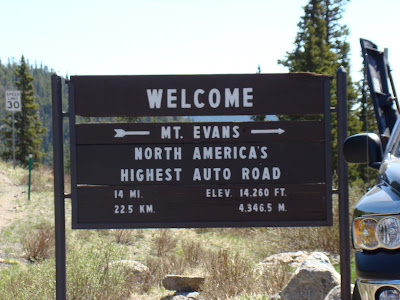 It is interesting to note that the highest temperature ever recorded on top of Mount Evans is 65 degrees! In fact there are only an average of 40 frost free days on top!  By the time we reached the top, it was a chilly 43 degrees - but the windchill was way below that! 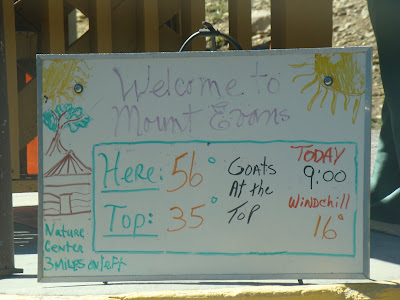 Mount Goliath is the boundary between sub-alpine forest and tundra. It contains most of Mount Evans collection of bristle-cone pine trees. Some of these trees are over 1,600 years old. 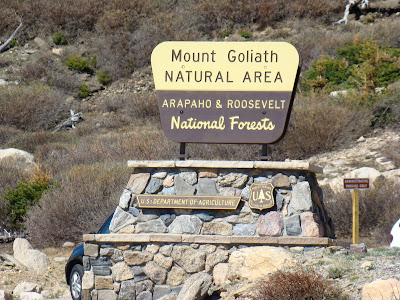 Within three miles from the rangers station, we are at the tree line.  Here we  encountered these strange looking trees.   I learned that at the edge of tree line, the trees are reduced to krummholz,  a German word for twisted wood.  Continual exposure to fierce, freezing winds and frost causes these trees to become stunted and deformed. 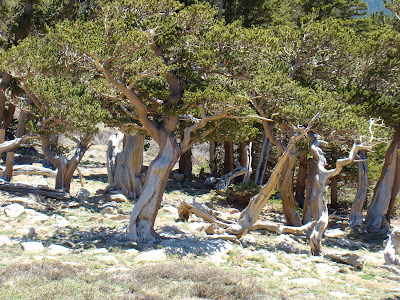 Looking back down at Echo Lake. 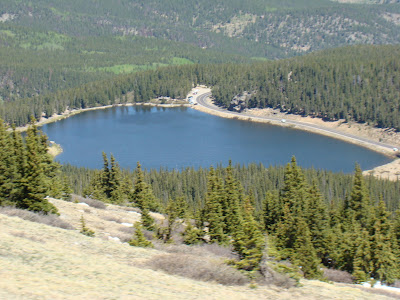 Above the treeline the road narrows even more and at times seems to be perched on the edge of the mountain.  Notice that there are no guardrails to be found on this road! 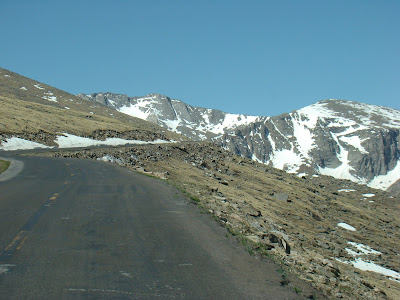 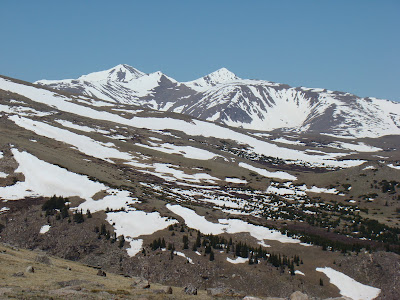 Around a corner and all of sudden we are in the middle of the snow! 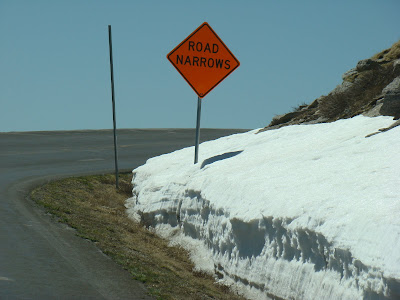 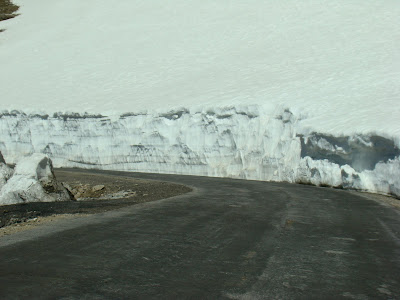 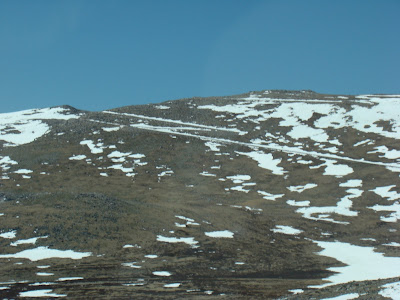 The next area we came upon was Summit Lake Park. Summit Lake is a tarn, that is a mountain lake formed in a cirque excavated by a glacier, which sits at 12,836 feet (3,912 m) altitude. 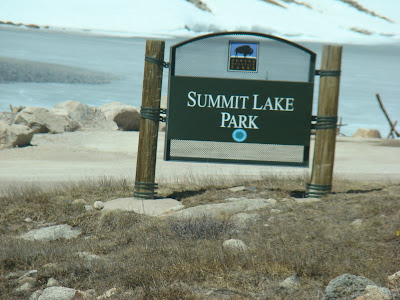 The tundra around the lake, particularly in Summit Lake Flats, the gently sloping area east of the lake, is frequently described as the southernmost area of arctic tundra in the world because it is water saturated and underlain by an extensive area of permafrost. This continual state of permafrost helps to prevent drainage of the area.  During the summer, the park is filled with wildflowers, some of which have not been found anywhere else outside of the Arctic Circle!!!  As a flower fanatic, I found this fascinating.
As we explored the lake, we discovered that it was partially covered in ice.  It is getting quite chilly outside and the wind is picking up. 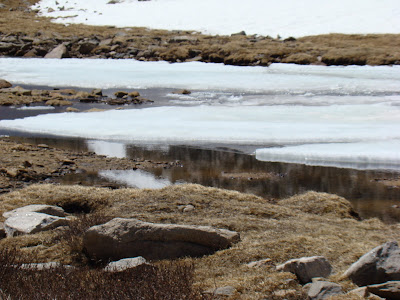 Back in the car for the final few miles to the top.  Poor Bill saw very little of the scenery as it took all of his concentration to drive.  Fortunately we went up early enough that there were few cars coming down the mountain that he had to worry about as we went around the narrow curves in the road. 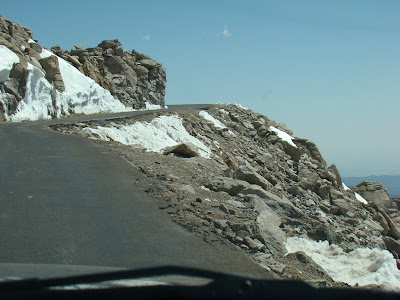 See the next post for the second half of the trip up Mount Evans.
Posted by Bill and Debi at 9:54 AM

Email ThisBlogThis!Share to TwitterShare to FacebookShare to Pinterest
Labels: Denver 2011