Finally Back on the Road Again..... Amarillo and Palo Duro Canyon

Picked up the motorhome first thing on Tuesday, June 22.  Everything is fixed - we are assured the slide-out is working perfectly.
We hit the road and headed for Amarillo, Texas.  We have reservations at the Amarillo Ranch RV Park for the next two nights so we do very little dawdling and head straight for Amarillo.  A steak at the Big Texan  Steak Ranch is waiting for us for dinner!  This is the home of the free 72 ounce steak if eaten within one hour.  Not something either of us will try!
We made it to Amarillo in time for that steak dinner.  Big Texan is full of charm and surprisingly the food was good, not excellent but quite passable.
The next day we got up and drove to Palo Duro Canyon State Park.  This canyon is called the "Grand Canyon of Texas".  Here is some information from their website:

The Canyon is 120 miles long, as much as 20 miles wide, and has a maximum depth of more than 800 feet. Its elevation at the rim is 3,500 feet above sea level. It is often claimed that Palo Duro Canyon is the second largest canyon in the United States. The largest, the Grand Canyon, is 277 miles long, 18 miles wide, and 6,000 ft. deep.

Palo Duro Canyon was formed by water erosion from the Prairie Dog Town Fork of the Red River. The water deepens the canyon by moving sediment downstream. Wind and water erosion gradually widen the canyon.

Early Spanish Explorers are believed to have discovered the area and dubbed the canyon "Palo Duro" which is Spanish for "hard wood" in reference to the abundant mesquite and juniper trees. 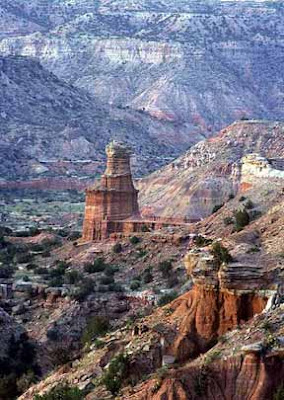 Hm, my pictures didn't turn out as good as the one above but here are a few.
Driving down into the canyon: 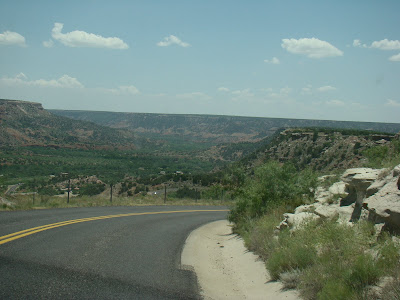 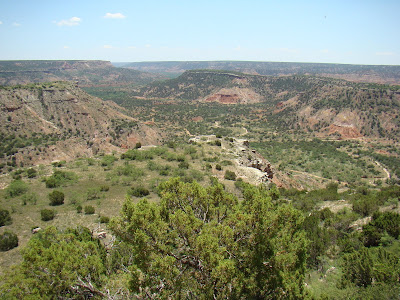 That evening we ate dinner at Feldman's Wrong Way Diner in the town of Canyon.  Fun place with good food.  Loved the standard gauge trains running around tracks at the ceiling height. 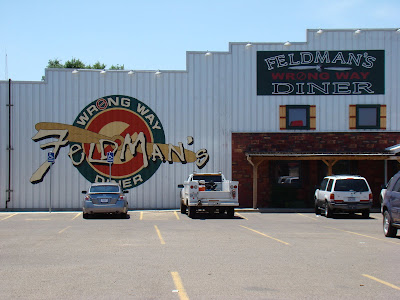 After dinner we went back to Palo Duro Canyon State Park to go see the musical "Texas". 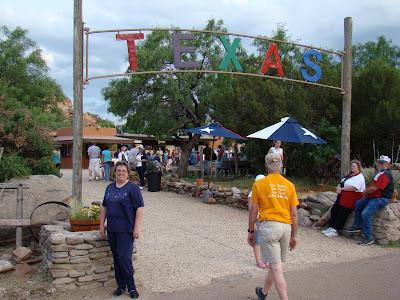 The stage is set in the canyon with a canyon wall as the stage's backdrop. 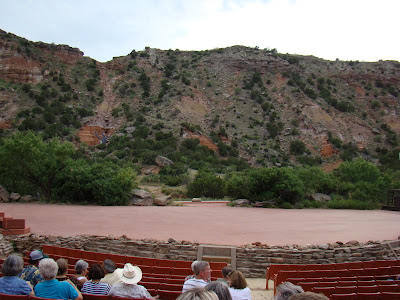