We began the day by stopping at the Rocky Mountain National Park Visitor's Center to get suggestions for areas to view. The very nice lady that I talked with recommended that we immediately head over to Bear Lake as it was early enough to still get a parking space. There she suggested we hike around the lake.
Apparently there is not enough parking spaces to accommodate everyone so there are shuttle buses to several of the trail heads for the hikers. By late morning all parking spaces are full.
So armed with this information we headed off for Bear Lake. 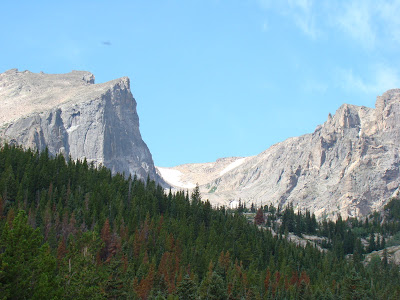 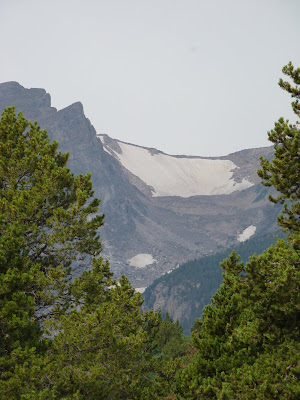 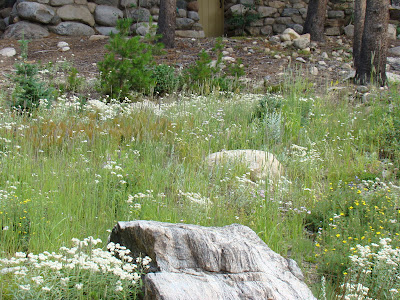 Bear Lake turned out to be a beautiful small mountain lake nestled among the pine trees. 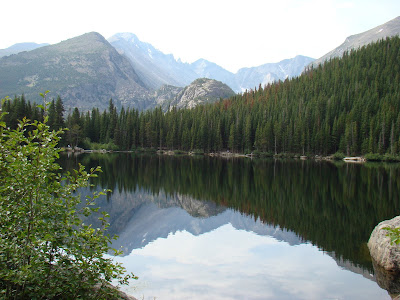 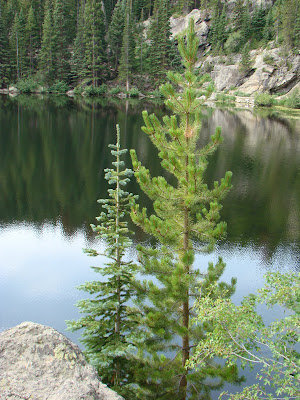 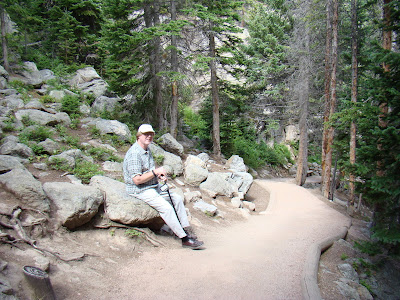 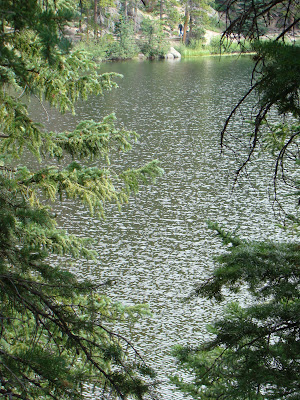 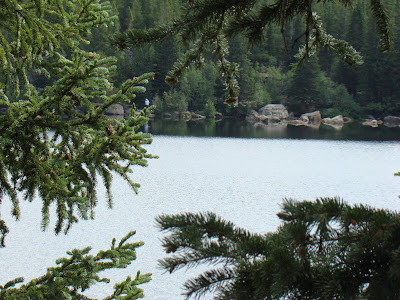 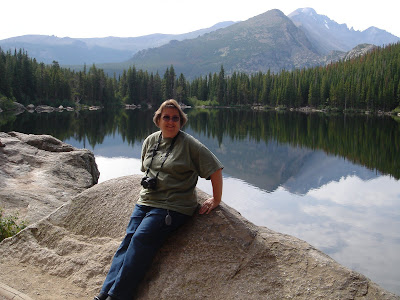 To cross the Rocky Mountain National Park, you have two choices. You can take the Trail Ridge Road which is the highest continuously paved road in the U.S., with much of the road on a ridge of mountains above the tree line. The other option is to take a dirt road called Old Fall River Road. After learning that this is a one way road so you don't have to worry about meeting cars, we decided to take this route. This turned out to be a narrow shelf road that clung to the side of the mountain with tight switchbacks. Since I wasn't driving - and much of the time was on the inside portion of the road rather than looking straight down - I loved this road. Poor Bill had to concentrate on driving so not sure he was as good of a tourist as I was. Fortunately it wasn't crowded so we could open all the window to enjoy the fresh air and go slow. 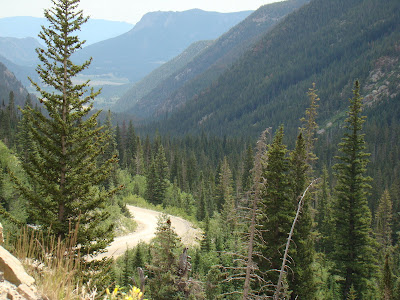 At one point we had to stop while a road grader was grading the road. This allowed us a bird's eye view of the drop off on the road. 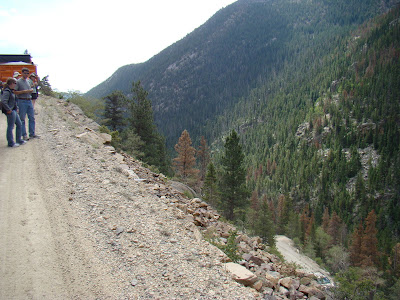 Getting closer to the snow pack areas. 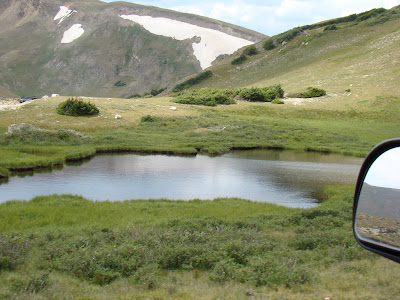 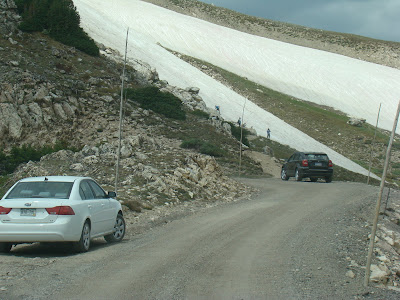 As we approached the snow packs, we noticed the streams flowing below them from the melting snow. 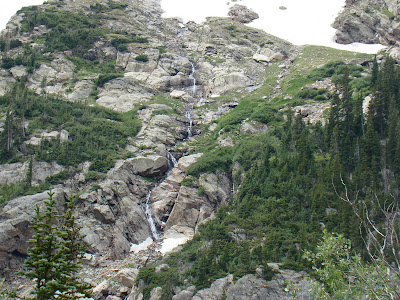 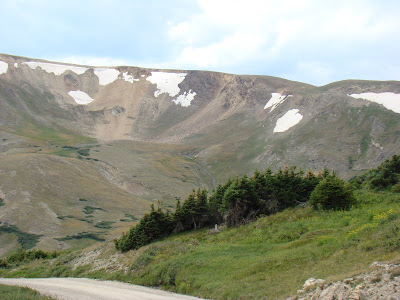 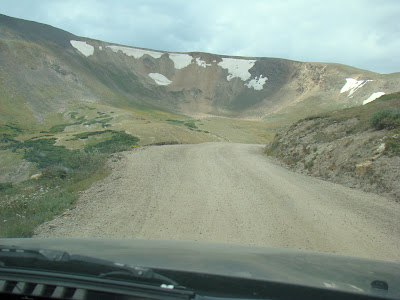 As we came around a corner Bill spotted some kind of critter lying down by the road. As we came closer we saw there were two bull elks. 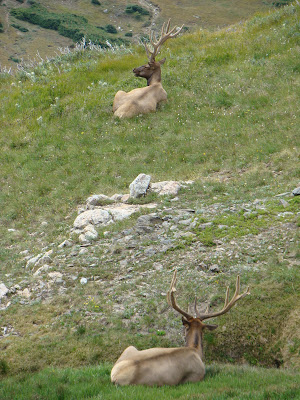 Then as we looked up a herd of elk started crossing the road. This immediately stopped all cars so everyone could take pictures. 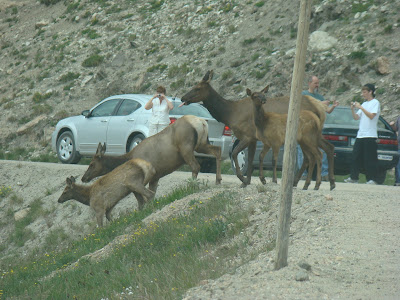 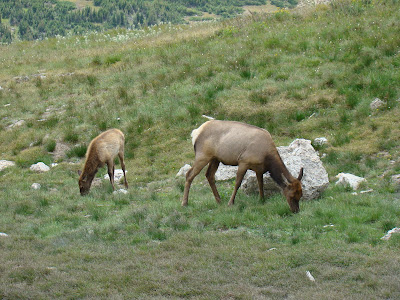 At the end of Old Fall River Road, there was a Visitor's Center. No parking to be had anywhere but I was fascinated by the snow poles. Looks like the Visitor's Center is covered with snow in the winter. 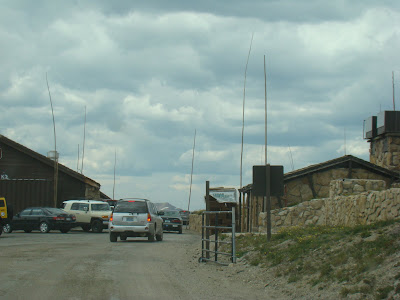 Once we started down off the ridge, we stopped at a scenic turnout to look down at the valley. While there we talked to a volunteer Park Ranger who told us that a bout 50 mommas and baby moose lived in the valley. She said that sometime during September the bulls would come down out of the mountains and join the females. 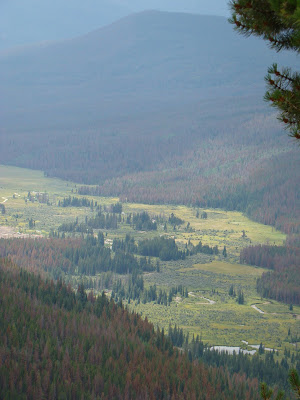 When we finally reached the valley, the meadow was absolutely gorgeous. Unfortunately we didn't see any moose or other wildlife of any kind. We did come across this wonderful old barn. 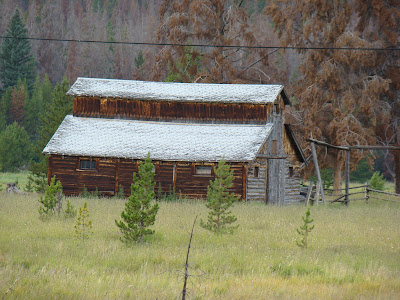 No longer was the stream a mad tumbling rush of water over boulders. In fact no more boulders. Instead the rushing stream turned into a gentle meandering creek slowly making its way across the meadow. 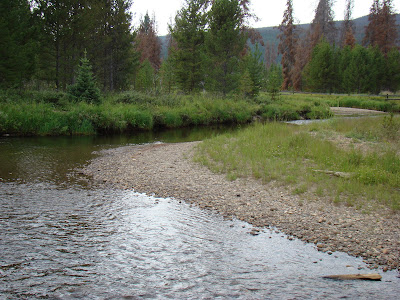 After we left the Park, we were driving along and saw a car stopped and the folks looking up in the trees. Now that of course means we must stop and look also. Lo and behold there was a nesting platform on top of a pole with a momma and baby in it. Look closely and you can see the baby's head. Daddy was sitting atop a tree a short distance away watching. 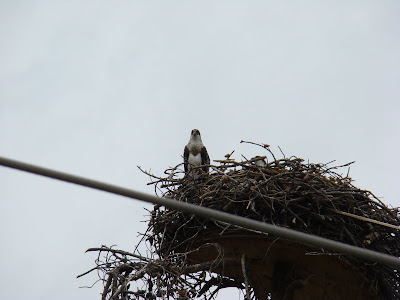 After leaving the Park we headed over to Black Hawk to check out the casinos. Last time we were there, the casinos were just being built. Unfortunately the wonderful old town has been taken over by the casinos, just as in Cripple Creek. Wasn't a good gambling day for Bill so we continued to Denver and dinner and eventually back to the cabin.