The day started out with Bill and I driving about 1 hour and 15 minutes to the town of Fairplay to pick up Steve and Carol, friends who were vacationing there.
Fairplay is located in an area called South Park. South Park is a grassland basin located at an elevation of 10,000 feet. Surrounded by mountain peaks, many of them over 14,000 feet high, this meadow covers about 1,000 square miles (640,000 acres) and is one of three large mountain valleys located in Colorado. This vast basin is visible from the International Space Station. This area is a winter grazing area for lots of wildlife.
In 1859 gold was discovered in the streams in the valley and the Colorado Gold Rush began in earnest.

In and around the town of Tarryall, miners were jumping claims which caused all kinds of problems. The town of Fairplay was founded during this time with the attitude that all miners would play fair! Hence the name Fairplay. 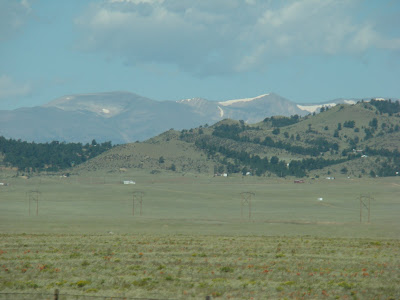 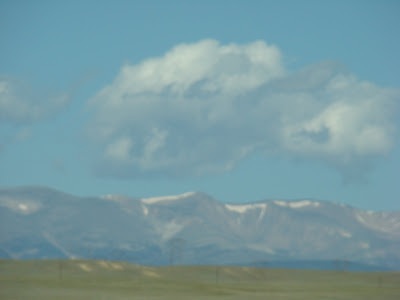 Fairplay is at an elevation of 10,000 feet. I discovered that the average yearly snowfall there is 131 inches. Also found out that their growing season in the summer is all of 60 days. Now I'm not so good at math but even I can figure out how long their winter lasts. Hm, I'm not moving there anytime soon. Brrrrrr........
Once we picked up Steve and Carol, we headed north to the Dillon/Keystone area. Our first stop was at the Keystone ski resort to ride the gondola to the top of the mountain. 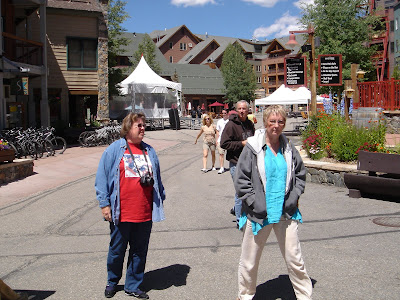 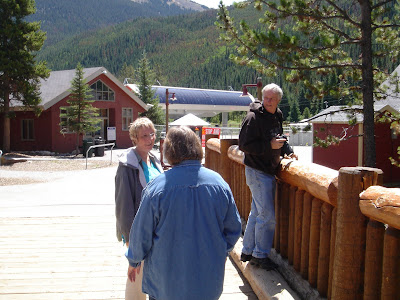 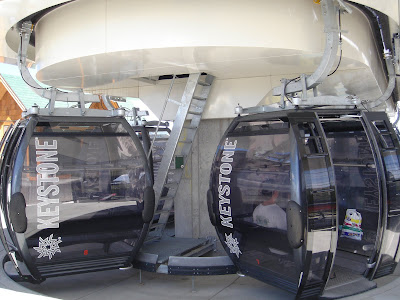 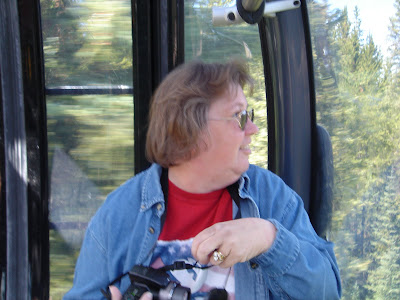 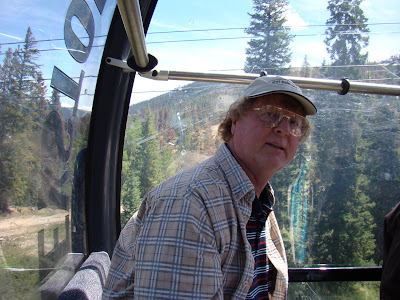 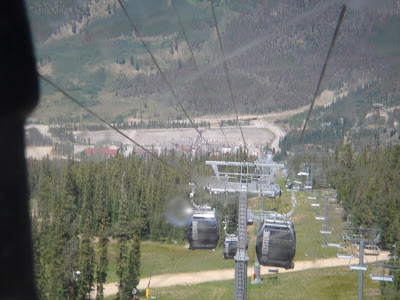 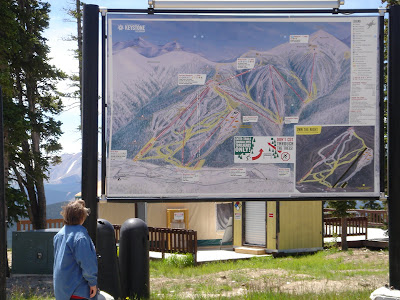 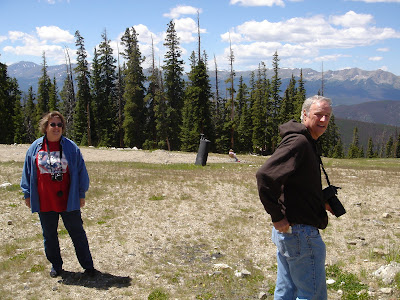 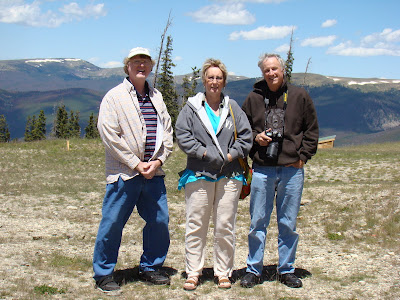 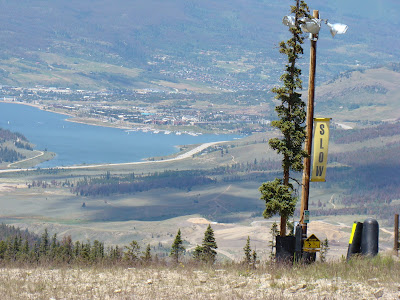 Next stop - Dillon and the Kansas City Barbecue Society Cook-off.

Now we didn't just happen upon this Kansas City Barbecue Society cook-off event. There is actually a story here. In the month following Bill's retirement, I would ask him what he plans to do with his life in retirement. One night I hear him exclaim "I found it". Well, not realizing that we had lost anything, I went running into the living room to see what he had found that had him so excited. He proceeded to tell me about the Kansas City Barbecue Society competitions that are held all around the country. He explained that if one attended a judging school, one could then be a judge at the competitions. He decided that this is what he wanted to do - travel to these competitions and be a judge. I mean, gosh, think of all the free barbeque you would be eating.... 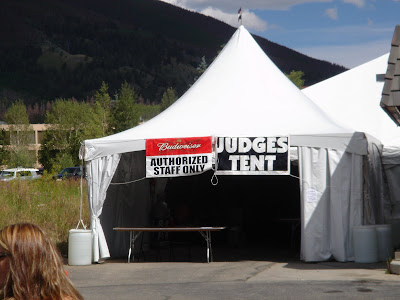 However, after seeing how many contestants/vendors were there - the winner's list showed 68 contestants - Bill has decided that maybe this is a bit more work than he wants to do. So we'll see....

But back to this competition. Here's how these competitions work: None of the vendors accept cash, instead you buy BBQ Bucks for $1.00 each. Each vendor then sets their own prices. Most of the vendors sell a sample of brisket, chicken or pulled pork for $1.00 or a rib for $2.00. All sell sandwiches but we quickly realized these fill you up too fast so samples are the way to go. 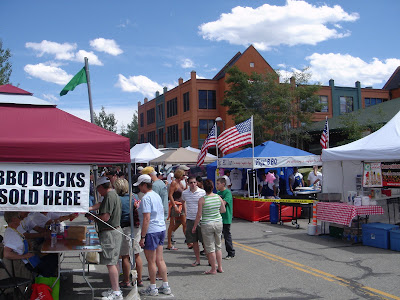 Once we figured out how to use the Barbecue Bucks, we were off and running, turning our Barbecue Bucks in for samples of the various meats. Choices ranged from the typical brisket, ribs, pork and chicken to prime rib, lamb and calf fries. 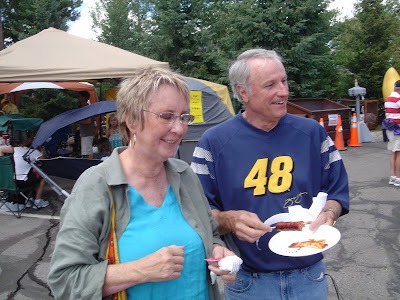 We lost track of how many kinds of barbecue we tried that afternoon but I'm here to tell you it was lots and lots! Some of it was incredibly tasty. However there were a few samples that we tossed in the trash. These might of been okay if we hadn't already tasted some that were just awesome in flavor and texture.
All in all, this was a wonderful experience. We look forward to the next barbecue competition that we come across. I guarantee we'll stop and sample the food. 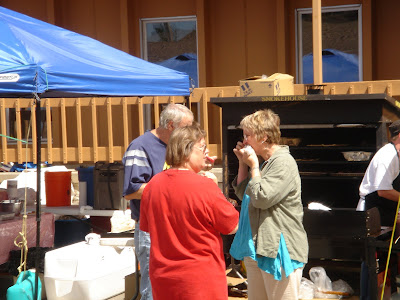 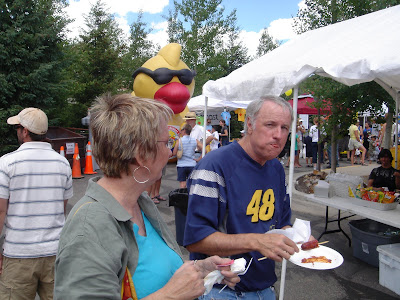 As we were leaving, Bill noticed a sign on one of the tents that said you could ring the bell for the price of one ticket. Amidst much laughter we talked Steve into ringing the bell. 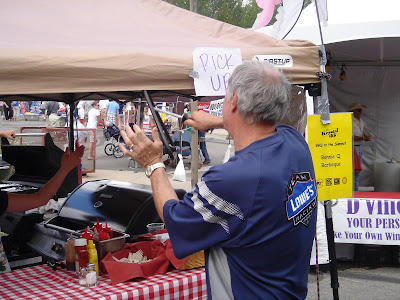 Lots of money was spent by the four of us but we didn't mind as this is a fund raiser for the Dillon Rotary Club. We read that last year's event sold around 180,000 barbecue bucks. That's a lot of money AND a lot of barbecue.
Posted by Bill and Debi at 10:39 PM